Pilates exercises focus on core strength as well as joint and muscle flexibility. Where-as traditional weightlifting focuses on building muscle size and strength. Between these two modes of fitness, weightlifting resonates more with men’s fitness goals of becoming stronger and more muscular. Pilates’ principles of core strength, flexibility, range of motion, and fluidity of movement may not be included in a man’s fitness checklist, but these are the underlying facets of overall fitness that everyone can enjoy.

Despite its wide recognition as a women’s exercise, Pilates, as a discipline, applies to both men and women. A lot of professional male athletes and predominantly male sports teams attest to the benefits of Pilates for their performance, longevity, and overall well-being.

Pilates offers unique benefits that can hardly be acquired through other exercise and workout routines. This article will explain the benefits of Pilates for men and how it can help in improving overall well-being, either as a recreational activity or supplementary workout.

His exercise routine, Contrology, was his way of manifesting the connection between the physical and mental realities. He believed that healing the body through physical exercise and therapy is better than healing using traditional medicine.

During World War 1, Joseph was confined in an internment camp where he organized workout sessions for others in the camp, particularly the injured individuals. During this time, he refined his exercise routines to accommodate bed-ridden soldiers.

Today, Contrology is more known as Pilates, a homage to the man who created the unique exercise routine and discipline. Pilates now incorporates similar tools that Joseph used during his time at the internment camp, including mattress springs. These inspired modern inventions of Pilates equipment such as the Reformer and Cadillac.

What are the Benefits of Pilates for Men?

Pilates enhances core strength by allowing the bodily movements to come from the center of the body. It also enhances flexibility and balance and promotes uniform development of the various parts of the body for better efficiency of movement. Its partitioned approach to muscular development addresses muscular imbalances gained from years of engaging large muscles.

Pilates is about grace of movement and conscious activation of stabilizing muscles. Strength and power are not the most important attribute in Pilates because the exercises being performed are low-impact, performed slowly, and mostly target the core muscles.

Pilates is also a weakness finder, which can benefit men who do conventional strength training and workouts. It can reveal weak spots in the body and can train the smaller muscles that support the larger muscles. Pilates will enhance flexibility and mobility by stretching and strengthening small joints and muscles. Incorporating Pilates with strength training allows for greater limb extension and prevents injuries.

Lastly, men can also enjoy the improvement in gait and posture. Pilates will help improve the alignment of the spine by strengthening and stabilizing core muscles. It can also improve the gluteal muscles using specific Pilates exercise variations.

Why Men Don’t Do Pilates? 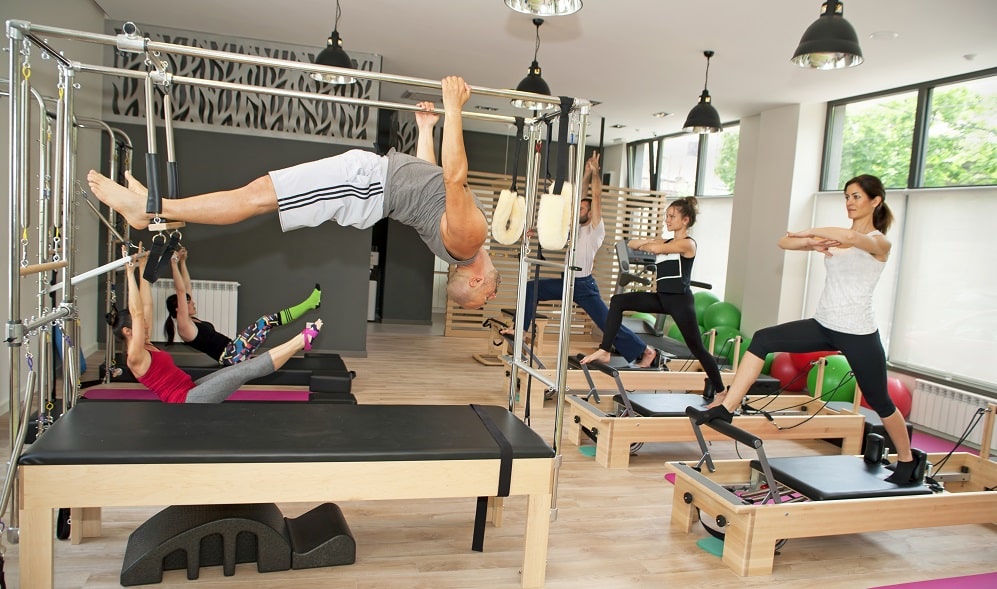 Despite the benefits of Pilates, women still outnumber men in most Pilates classes. Pilates became popular as an activity for women due to its similarities with yoga. As a result, it was deemed a “feminine” activity.

The common stereotype that men should build muscle and strength also discourages men. The male ego, which is a reflection of social expectation of toughness, convinces men to be embarrassed of joining a Pilates class where the majority of their classmates are women.

There is also a common misconception that Pilates is simply stretching, but with accompanying music and audible breathing. Men don’t realize that Pilates involves discipline that applies to both sexes. Pilates workouts require focus and concentration to unify the mind and the body.

Pilates works for people across all levels of fitness regardless of gender. While women enjoy the compatibility of their inate flexibility to various exercises, there are also Pilates workouts for men that aim to increase flexibility.

Popular Male Athletes Who Do Pilates

Professional sports teams including the NBA, NFL, MLB, and PGA recognize Pilates as a way to condition their players to not only play better but also last longer with lesser chances of injury.

NBA, NFL, and MLB players have different sets of workouts that target different parts of the body. Each sport has a different demand on the body, and players must focus on improving specific parts of the body to become successful in their sport. This means that a perfect NBA player might just be an average NFL or MLB player because of the difference in training. However, improving core strength and stability is the aspect that most, if not all, sports share.

In the later years of his career, David Beckham also did Pilates to keep up with the younger and faster players. Because of his longevity, his teammates Ryan Giggs also decided to do Pilates. Today, entire teams like the Steelers and the Redskins are also incorporating Pilates into the players’ training.

In golf, core strength is also important to help maintain power and stability in the golfer’s swing. Pilates can help improve muscle coordination, range of motion, and recoil, which are all important factors for a good golf swing index. Golf legend Tiger Woods said that Pilates helped him improve his game.

Joseph Pilates (a man) invented Pilates, not for men or women exclusively, but for all people across the fitness spectrum. It provides numerous benefits for men, and it is a good workout routine to improve facets of fitness that are rarely improved in conventional strength training.

Should a Swimmer Do Pilates?